Official Site Match Centre
Three changes to the team that started against Olympiacos in midweek - Vertonghen, Ndombele and Sissoko for Rose, Winks and Lucas. 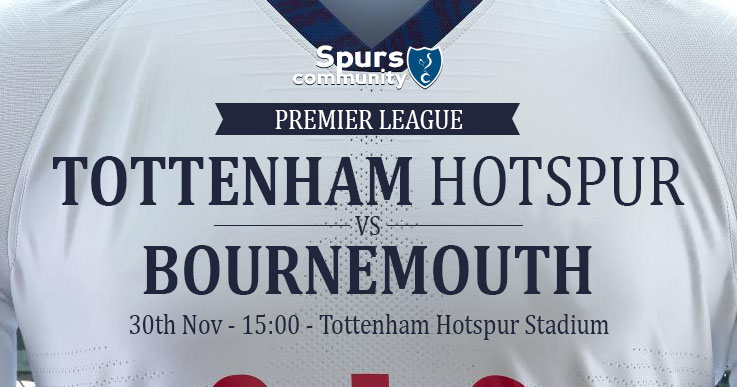 Bournemouth have won just 1 of their 8 Premier League (PL) meetings with us (D1 L6), though it did come in their last such game in May thanks to Nathan Ake's 90th winner. They have lost their two PL games, with them last losing 3 in a row back in December 2018 (a run of 4).

We have won all four of our PL home games against Bournemouth by an aggregate score of 13-0. Following our victory against West Ham last week, we are looking to secure back to back PL wins for the first time this season, lat doing so in April this year.

We have kept fewer clean sheets than any other PL side this season (1), with that shot out coming against Crystal Palace in September. The last time we had kept just one cleab sheet in our opening 13 PL games was in 2012-13 under Andre Villas-Boas.

This is the kind of home game that suits us as they'll come to play.

Plenty of goals I reckon.

We've had a good first half and a good second half under Jose so far. Time to put both together and get a convincing win with a bit of consistency.

My wishlist for this match, in order of preference:

the tired tread of sad biology

scat1620 said:
My wishlist for this match, in order of preference:

1) We win
2) We keep a clean sheet
3) We put in a really good performance
4) Ndombele and/or Lo Celso get some much needed minutes in the side in this game
Click to expand...

4) minutes that are significantly more than single digit

Anticipate a good game and lots of goals, from our side.
W

Anybody know if the tickets on the exchange drop in price on the day? Theyre ridiculous atm.

Managed to get some tickets for this - first league game I've been to and first game at the new stadium!

Looking forward to this one. My first trip to the new stadium - with the boy coming with me as well.

Hopefully a good performance and 3 points. It'd be nice to see Harry and Son scoring
K

We really need to win to get that momentum building. A clean sheet would be a welcome addition too.

We owe them a pasting after all the shit housing they pulled last season. Hopefully Lerma gets a red card for fuck all.

I want us to give them an utter thumping.