This has been, at once, the most stressful and hilarious match thread I have ever followed. Thank you and bollocks to you

VegasII said:
Bananas. So where’s this crazy gropa league ride taking us next?
Click to expand...

In the corner, eating crayons.

Mate, I just want to say thanks for the straight up, updates.
No bullshit, no bitching, just keeping those of us that were struggling to keep up with what was going on updated.
Much appreciated.

I for one cannot wait.

Marty said:
The national stadium is actually alright too. Not a farm field by any stretch.
Click to expand...

Aye. Like most things in Skopje, the national stadium was built at great expense with money “borrowed” from the IMF and world bank which Macedonia has no intention of repaying.

Much like their gold replica of Michelangelo’s David next to Mother Teresa’s birthplace.

Congrats!
Lot's of ref's mistakes for both sides. No pen for you on the first half.
May be foul against our GK before the penalty, second goal for you - clear offiside.

Japhet said:
That's some cracking build up play with 2 sharp passes from Ndombele. Just hope Jose shows a bit of faith in him.
Click to expand...

Jose gets a lot of crap for being a defensive coach and supposedly preferring defensive players instead but there's no way he prefers leaving Ndom on the bench.

He loves his attackers to move the ball quickly and incisevely like that, it's his desired goal.

The problem has always been what happens off the ball. Defensively AND offensively.

If Ndombele shows the same desire off the ball as he did tonight it won't be long before hes one of the first on the team sheet.

BuryMeInEngland said:
Even on this we only see the penalty but not the two reds
Click to expand...

Be grateful I didn't charge you a tenner...

Both Son and Kane looked horribly, pathetically, worryingly blase in their finishing.

spursgirls said:
I'm wondering if the replay of the game at 8pm will be the same or from cameras at the ground.
Click to expand...

That has been cancelled now. The earliest they will replay it is 2pm tomorrow.

Animal farmer said:
Congrats!
Lot's of ref's mistakes for both sides. No pen for you on the first half.
May be foul against our GK before the penalty, second goal for you - clear offiside.
Click to expand...

Take your word for it. Watched 70 minutes of dross stream died and when I got it back working it was 1-2 and they had 9 men

From what I saw, Ndombele did himself proud. Hojbjerg was pretty decent as the sitting midfielder. Son was pretty awful. Kane seemed slow and not interested, no urgency. Sanchez a bit all over the place.

Animal farmer said:
Congrats!
Lot's of ref's mistakes for both sides. No pen for you on the first half.
May be foul against our GK before the penalty, second goal for you - clear offiside.
Click to expand...

I completely forgot we were playing. Judging by the reports I've seen, probably a good thing
N

No need to panic. Lo Celso started brightly but faded understandably. Ndombele injected some much needed positivity and now just needs to up his conditioning. With Bale and a new LB coming in (fingers crossed), we should start to see the likes of Sissoko, Winks, Lucas, Lamela, Sanchez (so, so poor in the air) and Bergwyn back on the bench. Another CB and a forward and we’re looking better.

Blimey, it really was offside
S 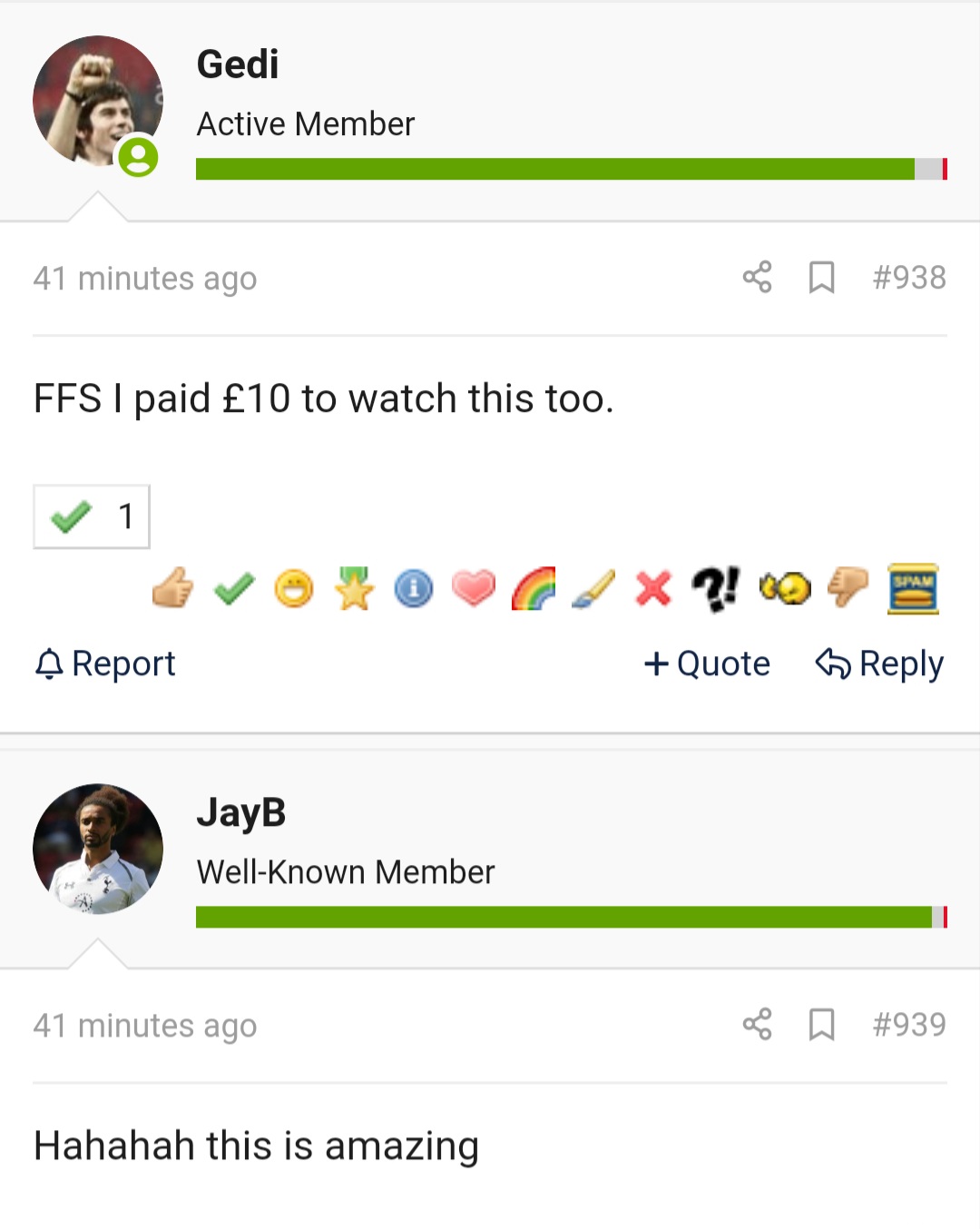 freeeki said:
So our next match is against Shkëndija in North Macedonia.

I’ve googled them and they play in Tetovo, which is only about 40 minutes drive from Skopje airport, so thankfully no ridiculous coach journey through the Macedonian mountains which are stunning but a pain in the arse at the best of times.

Tetovo is essentially an Albanian town but in North Macedonia. Half the roads in the city centre are literally made of mud. I’m glad there’s no supporters allowed in because it would be rowdy as hell.

Tetovo is also home to a multi coloured painted mosque which is a stunning gem hidden in quite a drab place.

elfyid said:
I completely forgot we were playing. Judging by the reports I've seen, probably a good thing
Click to expand...

HodisGawd said:
Blimey, it really was offside
Click to expand...